Overheard at the Mixed Grill

“I know it’s not polite to gossip, but here in the Mixed Grill (as opposed to the very old-fashioned and outdated Men’s Grill), you may overhear a thing or two about your own friends and family members. The great hope is that you don’t happen to overhear something scandalous about yourself.” 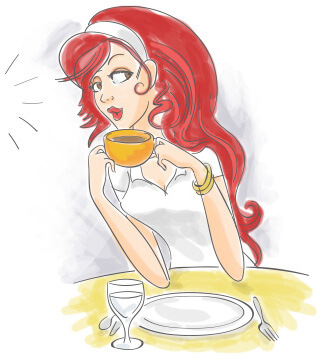 By LizKelly
In Overheard at the Mixed Grill
Posted March 29, 2019

Cal Johnson came into the Mixed Grill gunning for Harry. “You!” He pointed and shouted. “I need your help.”

“I was born to help. Whatcha need?”

“I need you to get Scarlett Langford off my back long enough for me to have a date night with my girl.”

“Why won’t she let you and Natalie have a date night?”

“Because she’s a slave driver, that’s why. Hit me up with something that will soothe my throat, will ya? Scarlett has me singing even though that damn album of hers is already recorded.”

Harry grabbed up a lemon and a bottle of honey along with a good blended whiskey. “I thought you were here to do some promo interviews and a couple photo shoots around town.”

“Exactly. But if anybody’s got a recording device in their hand, she wants me to give them a vocal teaser. She’s got me talking, singing, smiling, posing—doing everything I can do with my mouth, except kissing my girl. And get this. She’s told Natalie and me that we need to back off the public displays of affection. Because record sales will be stronger if the female population believes I’m back on the market.”

“Whoa. How did Natalie take that?”

“Nat didn’t get a chance to get a word in, because I freaked out all over Scarlett’s ass. Where’s Pinks?” he demanded. “That guy better learn how to lasso and hog-tie his woman or all the perks he gets from knowing me are going to be off the table.”

“What perks do you get for Mr. Williams?”

“Tickets to shit. Concerts. Ball games. Basketball games. Play-off games for football. Hell, I’m Cal Johnson. I can get anything. Except apparently a damn date with my girlfriend.”

Harry set a glass in front of Cal. “Drink that. Rest your voice. I might have something that can help in the back.”

“You’re a good man, Harry,” Cal said, taking a drink. “Better than Pinks,” he shouted after him as Harry left the bar and headed into the kitchen.

Cal heard the voice of his nightmares coming from his left. He cringed over his glass, refusing to give Scarlett the time of day. But then he felt the sweetest sensation on his cheek and couldn’t help but smile as his arm darted out and hugged Natalie Houser to him. He brought her in close enough so that when he turned his head, she was all that he could see. “How’s my girl?” he whispered.

“I talked Scarlett into taking off her record producer hat and becoming Red for the duration of the weekend. She’s agreed, and Pinks has invited us to a hot tub party. It may even snow, so that sounds like fun.”

Natalie pursed her lips in a sexy little smirk. “And what are these conditions?”

“I will not be singing. In fact, I don’t plan to do much talking either. Other than drinking beer there’s only one thing I’m planning to use my lips for.”

“Aww,” she said, leaning in and giving him what he hoped would be the first of many kisses that night.

He leaned around her and addressed Scarlett. “That okay with you Red? Because if not, I’m pretty sure Harry’s in the back looking for some rope to tie you up with in order to keep you out of my hair.”

“Don’t dare me, Miss. Langford,” Harry said, coming from the back with an armful of thick, red nylon rope.

Scarlett’s mouth hung open. Then she gave her head a shake. “What are you planning to do with that?”

Harry merely raised one brow. “Give it to Mr. Williams.”

BACK TO THE HENDERSON COUNTRY CLUB
Read More