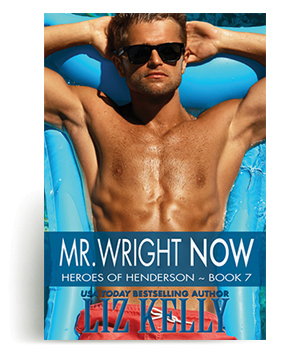 “Is this a test?” Jinx asked, pivoting her head so she was glancing at him sideways. Her dark brows were furrowed, and a mischievous grin played upon her lips.
Shit, she’s cute.
Jaxon’s own brows rose. “A test?”
“Is it?” Her voice was crisp, but the sly expression on her face indicated she was mildly amused at the thought. “Were you sent to … seduce me?”
Jax fell back in his seat, gaping at her. Of all the things she could have said … “Was I sent here to seduce you?” A half laugh, half snort spouted out of him. “I wish,” he insisted, picking up his wine glass and downing a big swallow.
She bubbled with laughter, the sound greeting him like jingle bells.
Seriously cute.
“Why in the world would you think I was sent to seduce you?” Then he leaned in, getting serious, and lowered his voice. “Would you like me to seduce you, Jinx?”
She blinked, stunned. And then backpedaled fast. “No. I mean, I don’t think so. I mean, of course no. I just wondered—”
“Of course no?” he interrupted, making a good imitation of being offended.
“Jaxon.” She glanced down at the table, touching the silver of her place setting. “Please.”
Jinx was blushing. He’d just made this uber-intelligent, beautiful girl blush.
Oh, Miss Davenport, you are so in for it now.
“All right,” he said. “Since I need time to shore up my pride after that unadulterated, ‘No, Jax, I definitely don’t want you to seduce me’ comment, I’ll listen to you explain yourself.”
She gave him a withering look, proving she could quickly bounce back from his teasing. “During my interview, it was obvious Mrs. Flores was not a fan. In fact, she practically stormed out before the inquisition had hardly begun.”
“Inquisition?” Jax widened his eyes over her terminology.
Jinx held up a finger. “Yet she arranged for you to take me to dinner and then sent a bottle of her favorite wine—which is rather full bodied and delicious.”
You’re full bodied and delicious.
“So, I’m just wondering—sort of putting puzzle pieces together here—if perhaps she has nefarious intentions.”
“My seducing you would be nefarious?”
“If I allowed myself to fall under your spell—during an interview, no less—it may reflect poorly upon my character.”
“So, I’m casting a spell.” He smiled.
“Umm …”
“Which you are fighting.” He felt his smile turn into a grin. His wicked one. Really. This was just too easy.