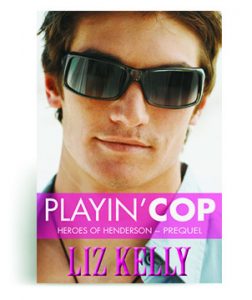 Annabelle angled her pretty little head at him and rolled her eyes. “A courtesy. For helping out the city.” She sighed and checked her watch. “The bank should still be open. How much is the ticket?”

“Three hundred dollars.” He slid the ticket through the opening in the window.

“That can be arranged.”

Annabelle held the ticket in front of her, saying under her breath, “For this kind of money I could have bought myself an escort for the party tonight.” And then her head shot up and she paused for a second before turning toward him, eyes determined. She lowered the window halfway. “Look. I am not going to be the one stuck kissing Lewis Kampmueller!”

“What do you have against—”

“I’ll pay your ridiculous ticket, in cash, before five o’clock under one condition. You be my date tonight.”

“Tonight?” Duncan took a step back from the car and rubbed a gloved hand over his chin. Be cool. Do not blow this. “Annabelle Devine. Do I look like the kind of guy who doesn’t have a date lined up for New Year’s Eve?”

“Well, do you?” she challenged. “Frankly, I don’t care. If this little fiasco is costing me three hundred dollars, I’m going to get my money’s worth. You’re Officer Friendly, you have a duty to serve and protect. Break your date. I have to be there early, so meet me at the Henderson Country Club at eight. I want full service in return for my cooperation with these shenanigans. It all sounds very fishy to me. ”

“Well now,” Duncan said, dropping his voice and making it full of promise, “Officer Friendly, at your service. Pay your fine before the close of business today and I’ll provide as much service as you can handle.”

Annabelle sucked in a breath and blinked several times.

Duncan turned and walked away. Grinning.

He heard her window slide down further and then Annabelle shouting, “Don’t you want to know the address?”

He continued to walk toward the squad car. “I’m a cop. With an iPhone. I’ll find it.”

“Do you own a tux?” she shouted back.

That stopped him in his tracks. He turned around slowly, incredulous. “What? Do I look like I was born in a barn?” That had her smiling, waving him off and turning around to fasten her seat belt.

Duncan headed back to Brooks and the squad car. That, he thought, had gone very, very well. He slid into the passenger seat and asked Brooks, “How fast can this thing get us to Raleigh and back?”

Brooks broke into a broad grin as he started the car and spun out on two wheels, turning them around. “So. The Keeper of the Debutantes, huh?” He glanced at Duncan, then shook his head. “Man, I did not see that coming.”