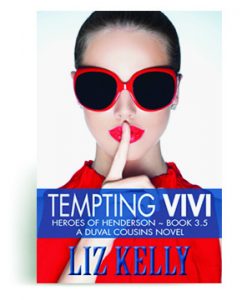 There she was, haggling with the bouncer who was studying her I.D. as if he were going to be tested on it later. He maneuvered to her side and even though it took her a double glance, when she did recognize him, she gifted him with a brilliant smile and her full attention.

“Hi,” she breathed back.

“Because it’s true, and you don’t want to go in there anyway.”

“Because the music sucks, the drinks are pricey, and my buddies and I are leaving for the clichéd strip club. Unless you save me by joining me for a walk on the beach.”

“Yeah. Do I look like a guy who enjoys strip clubs?”

Vivi looked him up and down and laughed. “Yes. You look exactly like the kind of guy who would enjoy a strip club.”

Lane looked down at his attire. Clean T-shirt, pressed shorts and flip-flops. “What makes you say that?”

“Spout? Testosterone?” he interrupted in disbelief.

“Oh really? Because the way you’re describing me you’d think I was all ape.”

“Oh my God, that is not what I said. At all,” she insisted, giggling, as he started walking them away from the club.

“Then you might want to start clarifying before I take offense and leave you to the boring, over-loud music and high-priced drinks instead of tempting you with this,” he said, pulling her in front of him and turning her in the direction he wanted.

He felt it take her breath away. The scene before them was captivating. Soothing. He had no idea there was going to be a full moon. It was just dumb luck that he’d maneuvered her to a vantage point where they could see the ocean. The moon seemed to be positioned just for them, bright as daylight, shooting its rays along the ocean, shining a wide swath of light across the water, up the beach, and through the buildings to where they stood. It was magic. Romantic. And Lane just kept right on following his instincts when he pulled her gently back to him, her back pressed against his front, bent down toward her shoulder, and leaned in to kiss her neck.

“Text your friends,” he whispered. “Tell them I’ve made you a better offer. I’ve got a car. I’ll make sure you get home safely and before curfew.”

“Curfew,” she snickered. “Fine, but I don’t know the address.”

She pulled out her phone from a tiny little bag hanging off her shoulder and began to do as he’d instructed. He pulled out his own phone and texted his brother.

“Staying. Vivi. Walk on the beach.”

He shoved the phone back in his pocket and waited for her to finish up. The response was almost immediate. He felt the buzz against his thigh and pulled out his phone.

“Happy Birthday, Bro. If you need privacy, take my room. I certainly won’t be needing it.”

He texted Tray back.

“Fat chance. But I appreciate the thought.”

“What—what?” he asked back, sliding the phone in his pocket and meeting her grin.

“Am I?” He felt his smile go even bigger. “Just figuring a pretty girl in the moonlight has gotta trump a dive strip club.”

“Kelly has crafted another delightful story full of sparkling dialogue, humor and the type of people you just want to spend time with. Give yourself a sweet treat. Read Tempting Vivi.”
~ArborGirl