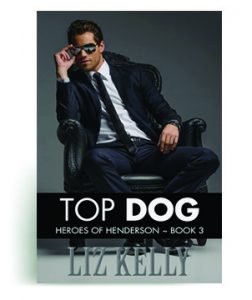 “What about my lips?” She reached up to touch them.

Crain jostled his head a bit, shaking the question off. “I just like ’em,” he said, wondering what the hell was so special about her lips. There was something, but hell if he could put his finger on it.

“Stop looking at my lips. People will talk.”

His gaze slid to her eyes. Pretty gold flecks danced around the center of her irises while bands of dark green circled the edges. “Let ’em talk.”

“Crain, please,” she said, hustling him down the sidewalk by grabbing at his hand and dragging him behind her.

He figured holding hands was a step in the right direction, so he followed along peacefully. But when he tried to entwine his fingers in between hers, she shook him loose.

“Aww, come on,” he said. “That was nice. If I’m holding your hand, I don’t want to fidget with my darn ball or anything else.”

“Get out your ball. This is a business meeting. I’m showing you Henderson’s illustrious business district.”

“It’s far from illustrious, and I’ve already seen it. Vance gave me the tour this morning while we ran.”

She stopped and turned. “You run?”

“No, but Vance does, and he insisted I accompany him. Which required breaking into his damn Tenderfoot Boutique so he could sell me running shoes and attire. He’s completely taking advantage of the fact that I did not pack for an extended stay. Of course, he’s putting me up so, I can hardly complain.”

“Then why would he insist that I drag you around the block?”

Crain stepped into her personal space and lowered his voice. “So I could kiss you.”

“Kiss me?” She backed away.

“Yes, kiss you.” He stalked right after her. “He saw us lip-locked yesterday. Thought we might want to try it again.”

“We are not trying that again.”

“Crain,” she said. Probably meant it as a deterrent, but he loved hearing his name come out of those lips. Her North Carolina accent was stronger now that she was back in her hometown, and it got him right in the nuts. So yeah, he wasn’t deterred. Not at all. He leaned in and touched his lips to hers in the softest caress he could manage. Just focused all of his concentration on what it felt like to have his own lips up against those sweet ones he found so fascinating.

When she didn’t start up with all the verbal nonsense, he slid his tongue across her bottom lip just soft and gentle-like, so he could memorize the line and scope of that full bottom lip. The one he’d had a hard time taking his eyes off.

Then some sort of magic occurred, and she dropped that tempting bottom lip just a little bit from the sassy top one—the impish little bow-shaped upper lip his tongue longed to trace the contours of. So he touched his tongue to the bottom part of the bow and gently ran the tip of it from side to side.

Was that a little purr he heard coming from inside this wild Carolina hellcat? His tongue sneaked in for a bit of mating before he decided to ease her into something other than a make-out session on a public street at noon.

“Dinner tonight,” he whispered against her lips. “Somewhere discreet.”

She kissed him then; her tongue taking over for a moment. Sending all of his powers of concentration away from her lips and straight to his groin. Damn the woman was talented. Talented and distracting.

He pulled back and waited until she opened her eyes.

He raised his brows. “Dinner?”

She sighed and turned, shouldering him out of the way. She looked right and left before she ventured from their secluded alcove to resume their stroll.

Man, did he just learn the hard way. Next time he had his lips on her, he was keepin’ his damn mouth shut—so to speak. Still, he needed to get the two of them together privately so he’d get some answers.

“I want more! I have finished all the books that I can find. I feel like I’ve lost a family. These books pull you in to the people and the town. Reading The Heroes of Henderson books is like going on a vacation.” ~Brenda Johnson