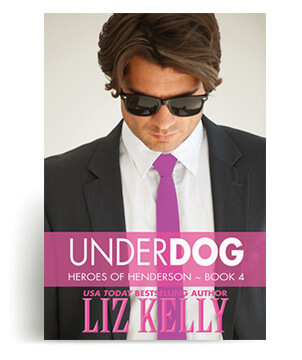 When Davis Williams, a.k.a Pinks, sets a goal, it’s done. Yesterday. His enthusiasm, ingenuity, and git ‘r done attitude have transformed him from interloper to integral part of “Team Henderson,” and one crazy-hot night of vigorous out-of-town lovin’ has busted him out of his Nice, Safe, Boring persona.

Things are really taking shape for Pinks, especially when he encounters the sassy siren he can’t forget. His goal now: coax the evasive Red into becoming a real part of his life.

But when Pinks discovers his mysterious lover is not only intimately tied to Henderson, but his own notorious scandal as well, he realizes he’s in the middle of a desperate no-win situation.

Can the man who believes Henderson is a field of dreams keep his own alive? Or has Pinks come up against the one dream he can’t possibly make happen in Henderson?

“I’m still smiling after reading this book. From the first in the series, Liz Kelly has had me hooked on Henderson. Since I actually live near the real town, I love rooting for the home team. This may be my favorite one so far. I loved seeing the lives of the characters as they continue to develop and fell in love with Pinks. Such a fun combination of romance, friendship, and hometown goodness. You don’t get bored – in fact, I can’t stop reading once I pick up a book. Great writing, great characters, great read!” ~Amazon customer