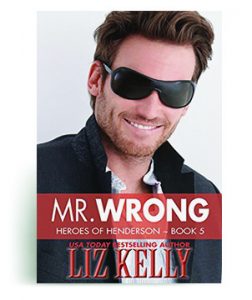 Now that Missy was in his arms, with all her defenses abolished for the moment, she seemed somehow smaller, more delicate as he maneuvered his hand back under her clothes to capture a breast and—shit—talk about soft. As much as he’d fantasized about this very moment, he certainly didn’t anticipate the degree of pleasure touching her so intimately would give him.

And hell if he didn’t hear her purr.

He could think of a whole lot of ways to get the two of them off while sitting like this. He just didn’t trust that Brooks or somebody else wouldn’t come knocking on his tailgate again.

“Pretty Girl,” he whispered, as his lips traced a path to her ear. “Let’s you and I take this some place more private.”

“I’m good,” she whispered between kisses.

“Yeah,” he said, choking on a laugh while kissing her back. “You are. You’re definitely good. But I’m fixin’ to make both of us feel a whole lot better.”

“Fix it here,” she demanded before doing her best to suck his tongue into her mouth.
He groaned. Indulging her. Until it hurt. Until he either had to stop them now or see it done in the parking lot. He tried to kiss-talk some sense into Missy. “Come tomorrow, you aren’t gonna want people speculating about—”

“Fiiiine,” she said, flouncing back from kissing him—exasperated—as if he were somehow throwing in the towel.

“What?” Thor was stunned. Apparently trying to shield her reputation was costing him points. “Oh, hell no on the fii-ne. We’re just going to see about that fii-ne.” He pulled that feather light excuse for a shirt over her head and laid the back of his seat flat before the brooding seductress in his arms had a chance to backpedal.

There would be no backpedaling.

Backpedaling was now off the table.

And although Thor knew he was too damn big to be fooling around in a truck, even if it was a helluva big truck, one thing he knew even better? Where there was a will, there was a way. It wasn’t graceful, but he managed to pull himself and Missy’s sweet body into the back seat of his cab, flipping her underneath him only to groan at the sheer pleasure of finally being exactly where he longed to be.

Missy chuckled softly. “Just when I thought you didn’t have game.”