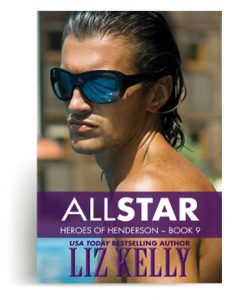 Poppy Mellin came to Henderson for one reason and one reason only. To earn a promotion. A big one. She’s not interested in making a love match while here in Henderson because her bags will be packed to head on back to Dallas just as soon as the sports academy opens its doors. She’s here for business. Nothing personal.

Although a woman does have needs.

Cal Johnson is the hottest pitcher in Major League Baseball. And, yeah, he’s about to knock it out of the park with a collaborative album that will no doubt rock the music world. Life is good, right?

Blindsided when the perfect woman walks out of his life, Cal’s off-season in Henderson has taken a turn for the worse. And no, he’s not interested in starting up his old one-night-stand ways. He’s a better man than that.

“I loved every minute of this book. Liz has a way of bringing the characters right to your heart. The Heroes of Henderson books are a must to read and as this one proved they just get better and better.” ~ Wilma Purdie, United Kingdom